To prevent perpetrators of domestic violence from getting spousal support from their victims, the legislature has clarified and expanded the types of evidence related to domestic violence that a judge must consider when making a spousal support award under Fam C §4320. Family Code §4320(i) now specifies that all documented evidence of any history of domestic violence between the spouses or by one spouse against either spouse’s child be considered, including (1) the issuance of a protective order after a hearing under the Domestic Violence Prevention Act (DVPA), (2) a finding by a court during the pendency of a divorce, separation, or child custody proceeding, or (3) other proceeding under the DVPA that the spouse has committed domestic violence. This provision develops further the domestic violence exception to California’s “no-fault” divorce system. See Fam C §4320 (amended by Stats 2018, ch 938, effective January 1, 2019).

Another new law adds “domestic violence felony” to the type of conviction that will trigger protections against a victim paying an abuser spousal support. To protect spouses who were convicted of felony domestic violence but were actually the abused spouse, the law also authorizes the court to make a fact-based determination and decline to apply select provisions. These changes only apply to convictions that occur on or after January 1, 2019. See Fam C §§4324.5, 4325 (amended by Stats 2018, ch 850, effective January 1, 2019).

A new law clarifies the best interests determination for child custody and strengthens the presumption against custody to a perpetrator of domestic violence. It amends Fam C §3020 to specify that children have the right to be safe and free from abuse and that domestic violence in a household where a child resides is detrimental to the health, safety, and welfare of the child. Family Code §3100, which requires a court to grant reasonable visitation rights to a parent when such visitation would be in the best interest of the child, now references Fam C §3020. The law also expands the scope of training for judicial officers who handle domestic violence matters to include the detriment to children living in a home with domestic violence and that “domestic violence can occur without a party seeking or obtaining a restraining order, without a substantiated child protective services finding, and without other documented evidence of abuse.” See Fam C §§3011, 3020, 3044, and 3100 and Govt C §68555 (amended by Stats 2018, ch 941, effective January 1, 2019).

For more about the consideration of a child’s welfare in custody and visitation orders, see CEB’s Practice Under the California Family Code: Dissolution, Legal Separation, Nullity §7.22.

Under existing law, pets are generally treated as personal property. If acquired during the marriage, pets are generally characterized as community property. New legislation does not change that, but it guides the courts on awarding ownership of a pet in a divorce proceeding. Courts will be able to “assign sole or joint ownership” of a “community property” pet, taking into consideration the care of the pet. The court may also make temporary orders related to the care of the pet, before the final ownership determination. See Fam C §2605 (added by Stats 2018, ch 820, effective January 1, 2019).

A new law updates and revises the Uniform Parentage Act (UPA) to provide equal treatment to children born to same-sex couples. This includes updating how genetic testing is performed and used to establish and challenge parentage, and creating a process whereby children conceived with donated sperm or ova can get medical information about the donor. See Assembly Bill 2684 (Stats 2018, ch 876, effective January 1, 2019).

For more on the UPA, see CEB’s Practice Under the California Family Code: Dissolution, Legal Separation, Nullity, chap 8A.

Although notice and an opportunity to be heard are fundamental to due process, in the domestic violence context there may not be enough time or too much danger to give notice to a defendant before a temporary restraining order is issued. Current law allows the court to issue various ex parte orders relating to domestic violence. A new law clarifies that the court cannot deny a petition for an ex parte order for such relief solely because the other party was not provided with notice. This will help ensure that victims can get short-term (generally 21 days) legal protection absent notice to the alleged perpetrator. But notice is still required for a permanent domestic violence restraining order. The law also permits alternative forms of service if the court finds that the restrained party is evading personal service. See Fam C §§6300, 6326, 6340 (amended by Stats 2018, ch 219, effective January 1, 2019).

When assessing a parent’s earning capacity, in lieu of actual income, a new law allows the court to consider the “overall welfare and developmental needs of the children, and the time that parent spends with the children.” This revision is intended to ensure that the court’s attention is not narrowly focused on just the child’s financial needs, but includes the child’s need for care and attention from a parent. See Fam C §§4058, 4331 (amended by Stats 2018, ch 178, effective January 1, 2019).

On the consideration of earning capacity, turn to CEB’s California Child and Spousal Support: Establishing, Modifying, and Enforcing, chap 3.

Current law specifies the circumstances under which a proceeding may be brought to have a child declared free from the custody of either or both parents, such as neglectful or cruel treatment. Family Code §§7800, 7802. A new law establishes that a finding that a parent committed severe sexual abuse against the child under Welf & I C 361.5 is prima facie evidence that the parent has neglected or cruelly treated the child for the purposes of terminating parental rights. See Fam C §7823 (amended by 2018 Stats, ch 83, effective January 1, 2019).

Existing law provides that anything said during mediation is not admissible in evidence or subject to discovery, and all communications, negotiations, and settlement discussions by and between participants or mediators are generally confidential. A new law requires that a lawyer must provide his or her client, as soon as reasonably possible after the client agrees to participate in the mediation or mediation consultation, with a printed disclosure containing the confidentiality restrictions related to mediation, and obtain a printed acknowledgment signed by that client stating that he or she has read and understands the confidentiality restrictions. If the attorney is retained after an individual has already agreed to participate in a mediation or mediation consultation, the attorney must comply with the requirements “as soon as reasonably possible” after being retained. Evidence Code §1129 contains text that attorneys can use as their printed disclosure. See Evid C §1122, 1129 (amended and added by Stats 2018, ch 350, effective January 1, 2019).

The Tax Cuts and Jobs Act of 2017 implemented many significant changes for families, including:

For more on the impact of federal tax changes on families, check out CEB’s California Child and Spousal Support: Establishing, Modifying, and Enforcing, chap 3. 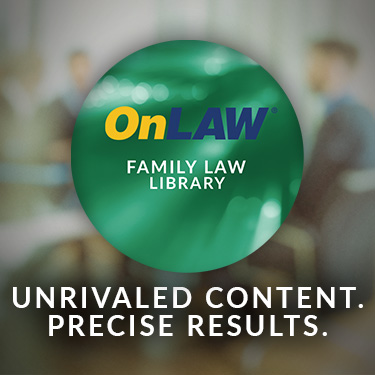